Posted on February 28, 2013 by wernerschwartz 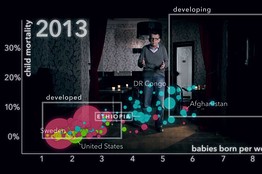 By Robert A. Guth

What countries are in the developing world? Hans Rosling thinks you probably don’t know.

In this video, produced for the release of Bill Gates’s 2013 Annual Letter today, the quirky Swedish academic argues that people incorrectly divide the world into two – between developed countries, such as the U.S., and developing countries, like Ethiopia – based on the number of children a woman has and how long the children live.

“In many people’s minds the world still looks like this – developed and developing,” Mr. Rosling says in the video, showing a cluster of countries separated in two distinct boxes. “But it’s a myth because the world has improved immensely in the last 50 years.” He proceeds to demonstrate how, thanks to improvements in health care and other factors, child mortality has fallen rapidly in large swaths of the world since the 1960s. Over time…

This entry was posted in Uncategorized. Bookmark the permalink.